Ralph Lauren is 2010 Luxury Marketer of the Year

By Peter Finocchiaro at LuxuryDaily Polo Ralph Lauren Corp. has been named Luxury Marketer of the Year, the most prestigious award in luxury marketing.

The New York-based lifestyle brand beat out runner-up Louis Vuitton and third-place finisher Burberry for the top honor. The apparel-to-furnishings group earned the accolade on the strength of an unparalleled multichannel strategy that blazed new trails in the world of interactive marketing while continuing its rich and distinct brand story in print and beyond – all leading to double-digit growth in 2010.

“Creating a luxury brand is one thing, but maintaining its marketing aura across good times and bad, traditional media and new, takes genius and Ralph Lauren,” said Mickey Alam Khan, editor in chief of Luxury Daily, New York. “Ralph Lauren’s marketing has become a byword for excellence with consistent creative messaging and effective call to action in an era where luxury brands struggle to retain their mystique,” he said. “Marketing well done is all about stoking desire from turn of page, click of mouse, tap of phone or opening of mail. “The pony gets it in a gallop.”Ralph Lauren was named 2009 Mobile Marketer of the Year, itself the most prestigious honor in mobile marketing (see story).

Digital dynamo
Ralph Lauren’s marketing strategy operates on the principle of “merchantainment” – the blending of commerce and culture, according to David Lauren, chief marketing officer of Ralph Lauren. The key concept underlying the philosophy is that the luxury shopping experience is not just about transaction, but immersion as well. Technology aids in the synthesis by letting Ralph Lauren integrate rich-media experiences and enabling a degree of interaction formerly unavailable between brand and consumer.

“The most important thing for us was using technology in a way that expands on our brand’s philosophy,” Mr. Lauren said. “We start with the philosophy and then apply technology to tell our story.”

In 2010, Ralph Lauren extended the merchantainment strategy to create exceptional campaigns across all digital channels. Perhaps the best example of this mentality was a shoppable storybook called “R.L. Gang” that promoted the Ralph Lauren Children fashion line. The online and mobile campaign engaged consumers through a storyline narrated by entertainer Harry Connick Jr. that featured characters wearing Ralph Lauren items. Users could click the characters to shop the items online or on their iPads. 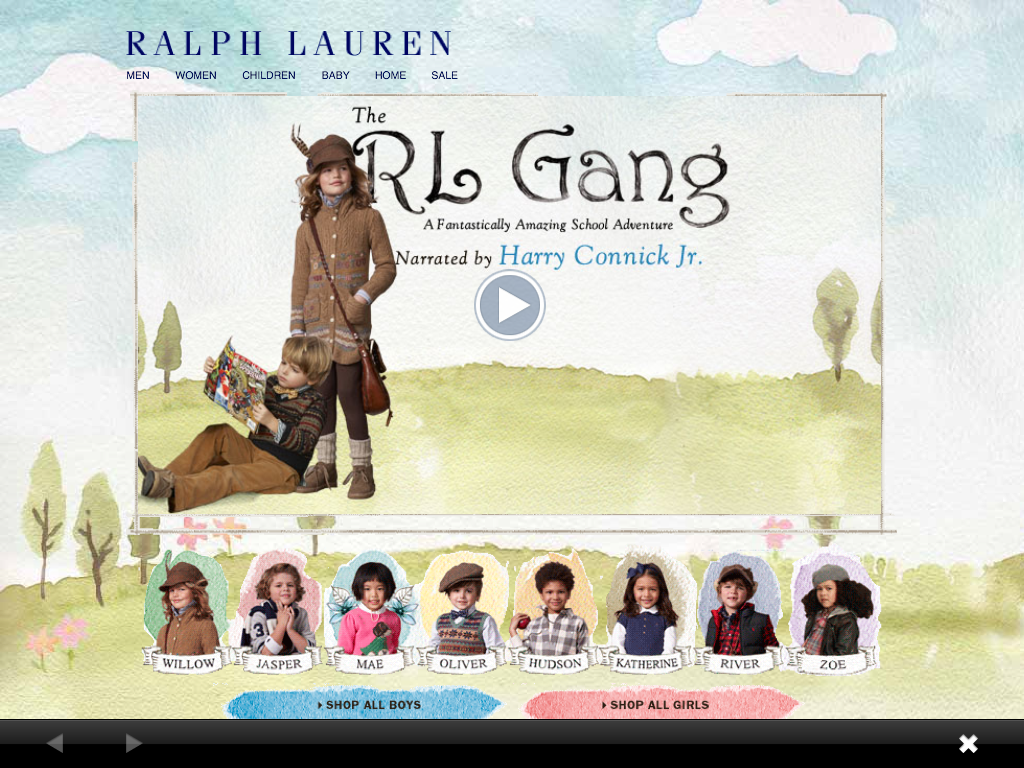 Ralph Lauren promoted the initiative via online, print and mobile ads (see story), as well as with email, store and window displays, and in-store events. The story book was viewed 131,000 times, generating more than 100 million impressions worldwide, and drove a 250 percent increase in sales over the corresponding period in 2009. Similarly, Ralph Lauren dovetailed online, mobile and event marketing through its sponsorship of this year’s Wimbledon and U.S. Open tennis championships.

The brand’s Legends Clinic recruited tennis stars – Venus Williams for the U.S. Open and Boris Becker for Wimbledon – to answer questions from fans and give visual demonstrations of tennis techniques. The initiatives were streamed live online at RalphLauren.com and on the brand’s mobile Web site at http://www.ralphlauren.com/usopen and http://www.ralphlauren.com/wimbledon.

Ralph Lauren then let consumers buy the items worn by the tennis stars.

“[The Legends Clinic] was something you would expect from Sports Illustrated or ESPN,” Mr. Lauren said. “For it to come from Ralph Lauren makes it all the more interesting. “Ralph Lauren is not just a fashion company, but a media player,” he said.

Bringing luxury to life
There may be no more clear example of Ralph Lauren’s commitment to vividly portraying its brand story than a spectacular lightshow orchestrated at its New York and London flagship stores in November (see story). The event was billed as a four-dimensional celebration of RalphLauren.com’s 10th anniversary and the expansion of the designer’s ecommerce strategy into Britain in October and planned worldwide growth (see story). Ralph Lauren carved out two blocks of London’s Bond Street and New York’s Madison Avenue to carry out the event, which regaled attendees outside the stores with a multisensory experience. In fact, 3D projectors splashed images such as models, Polo players and Ralph Lauren products against the building while giving the appearance that the structure’s form was shifting. 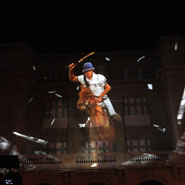 Meanwhile, a variety of elements was released into the environment to stimulate other senses such as smell and touch. The event generated headlines worldwide and has been integrated into subsequent marketing efforts including a Ralph Lauren 4D Web site bearing the subtitle “Celebrating 10 years of digital innovation” that  highlights several innovative Ralph Lauren campaigns from the past decade. 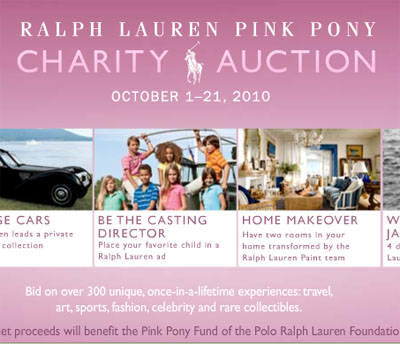 Luxury consumers increasingly hone in on corporate responsibility as an important, even determining factor in their shopping decisions (see story). Without a doubt, Ralph Lauren put its best foot forward as a corporate citizen in 2010. The brand gained widespread media attention for its Pink Pony Auction in October that supported the 10th anniversary of the Pink Pony Fund – a charity that supports programs for cancer screening, early diagnosis, treatment, research and patient navigation (see story). The online auction was powered by charitybuzz and offered fashion, travel, art, collectibles and experiential prizes to top bidders. More than $1 million in proceeds went to the Pink Pony Fund.

Consumers could also donate $10 to the Pink Pony Fund by texting “Pink Pony” to the short code 501501.  The brand drove awareness of the initiative with print and online advertisements, supported by social media.

For example, the auction was promoted via the use of Ralph Lauren’s Facebook page, where it posted an application that enabled consumers to alter the color of their profile pages so they appeared pink in support of the cause.

Ralph Lauren’s Facebook account accumulates an average of 2,751 new fans per day, according to research done by L2 Think Tank between July and September 2010. The page has more than 2 million followers. 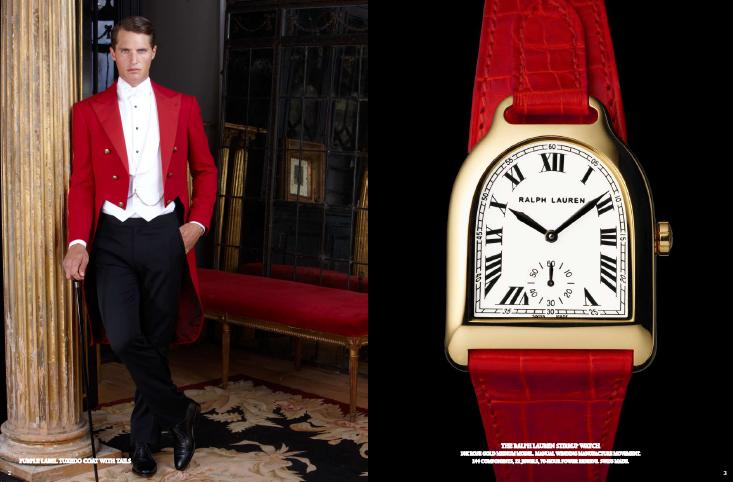 Detailed and consistent branding
Ralph Lauren’s sumptuous advertising evokes a Stateside counterpoint to the chateaus and parlors of European high society. This year’s slate of creative continued and built on the themes and imagery that the brand has been presenting for years – unabashedly sleek and refined even at a time when many luxury marketers felt compelled to head down-market amidst economic uncertainty.

“Over the years, Ralph Lauren has been one of the very best at building a brand,” said Laura Ries, president of Reis & Reis, a Roswell, GA-based marketing strategy consultancy. “He stuck it out through the recession, didn’t downgrade his brand and that’s what luxury brands need to do when times are tough. “You don’t have to continuously change all the time,” she said. “If you focus on finding your voice and vision and stick to it, it can very obviously be successful and profitable.”

However, great branding means more than just beautiful imagery. How a marketer uses the visuals makes all the difference. Ralph Lauren leverages its creative across all channels to strengthen its impact. For example, the designer used pictorials shot for its Holiday 2010 campaign for branding on RalphLauren.com, as collateral in the company’s seasonal mailer, as well as in print, online and mobile promotions.

Strength in tough times
Ralph Lauren earned praise for the manner in which it weathered the economic storm of 2008 and 2009, emerging stronger than ever this year. The brand opened new flagship locations, expanded its ecommerce and mobile operations, and maintained the quality of service that has helped distinguish its retail experience.

“Ralph Lauren creates in the mind-set of consumers a lifestyle that they feel they are attaining and accessing through its products,” said Milton Pedraza, CEO of the Luxury Institute, New York. “He’s done that for years, but really sharpened the focus to make it a wonderful art and science of luxury.

“[The brand] should be a wonderful example for luxury – especially during the recession – of how to manage the equity of a premium or luxury brand intelligently and in a financially powerful way,” he said. “In the last two years, coming out the recession, Ralph Lauren has really shown the world how you can be resilient and how you can scale and how you can still do that and maintain your prestige and relevance as a brand.” In the end, for Ralph Lauren, marketing is all about a narrative.

“This company was founded 45 years ago – it started with a tie,” Mr. Lauren said. “That tie was designed to tell a story about a world. “The brand was called Polo because it gave you the feeling of a luxury world on and off the sports field,” he said. “Every aspect of our brand brings you into a world rich with imagery – like stepping into a movie.”