The Ritz-Carlton is taking its legendary service and unmatched luxury to sea. Beginning in 2019, the company will offer bespoke cruises on three lavishly built yachts.

Each custom-built yacht offers an intimate journey with space for only 298 guests. Accommodations include 149 suites, each with its own balcony, and several luxurious duplex penthouses. As with The Ritz-Carlton on land, cruises feature:

Voyages range from 7 to 10 days and include overnight and daytime ports of call. The first yacht sets sail in 2019; reservations open May 2018. 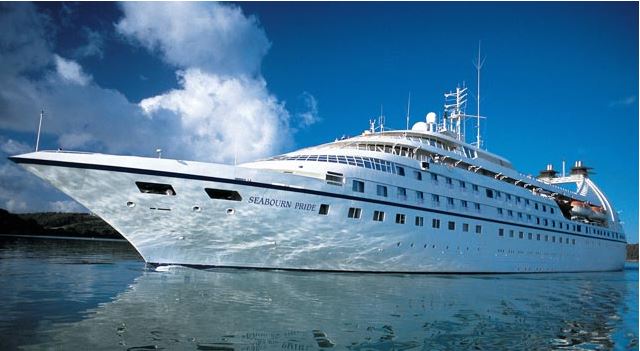 Oranjestad, Aruba
Although no written record of the island’s discovery by Europeans exists, it was in 1499 that Alonso de Ojeda landed in Aruba and claimed the island for Spain. Over the years, possession changed from the Spanish to the Dutch to the British and back to the Dutch, with independence promised by 1996. Aruba is one of only a few Caribbean islands where the indigenous Indian population was not decimated by invading Europeans. The native Aruban today is a mixture of Arawak Indian, and Spanish and Dutch colonizers. The official language is Dutch, with both English and Spanish widely spoken. The local population’s everyday tongue is Papiamento, a mixture of all of the above plus a few words left over from the days of the Arawak. The countryside is dotted with cottages surrounded by cactus fences and bright splashes of bougainvillea, oleander and hibiscus. During our call, enjoy a stroll through the capital, Oranjestad. Colorful Wilhelminastraat is lined with typical Aruban buildings of the Dutch Colonial style, and plenty of shops offering duty-free goods.

Willemstad (Curacao), Antilles
Delightful Willemstad is the capital of the five-island Netherlands Antilles, which in turn are part of the Kingdom of the Netherlands. Gabled buildings bring to mind Dutch cities, while working windmills dot the countryside, helping to provide the island with much-needed fresh water. Two bridges connect Otrobanda and Punda, the city’s two halves. The Queen Emma Pontoon Bridge, now exclusively a foot bridge, was built in 1888. The imposing Queen Juliana Bridge arches over the channel, providing the link for motor vehicles. Shoppers will find no shortage of temptations here, while those so inclined will find excellent scuba diving opportunities.

Mayreau, Grenadines
At this idyllic islet in the Tobago Cays, we sometimes anchor and indulge in a water sports Marina Day.

Soufriere, St Lucia
Seabourn prefers to call in at Soufriére Bay on St. Lucia’s eastern side, away from the busy capital of Castries. It is a perfect example of a Seabourn hideaway, tucked under the conical peaks of Les Pitons, inactive volcanic peaks that, along with their nearby valley, are a UNESCO World Heritage Site. The town is compact and flat, a great place to stroll around and listen to the lyrical French patois of the local people. A short way away, you can indulge in one of the world’s only “drive-in volcanos” whose steaming vents and odorous fume roles give the place its sulfurous name. Nearby is the Anse Chastenet Resort, one of the world’s most renowned and set on a breathtaking stretch of beach.

Roseau, Dominica
Once a prominent port under the protection of the Hanseatic League, Rostock still owes its importance to the sea. A fine view of the city, with a number of restored late-Gothic and Renaissance buildings, may be had from the harbor. Stroll through the heart of the medieval old town, with its eye-pleasing variety of architecture. The unusual Rathaus features seven slender decorative towers, giving it a profile similar to that of a birthday cake. Be sure to visit St. Mary’s Church (Marienkirche), a handsome Gothic structure noted for its huge astronomical clock dating from 1472; its calendar extends to the year 2017. You may also wish to visit the ship docked permanently at the Port Center. After the fall of Communism, additional space was needed for the flood of consumer goods which swept in from the west, so the vessel was commandeered and converted into shops.

Philipsburg (St. Maarten), AN
Since 2010, Sint Maarten has been a constituent country within the kingdom of The Netherlands. It comprises the “Dutch Side” of the island of Saint-Martin, the other half being a French overseas territory. Philipsburg is its capital and a busy deep-water port city. It is a popular port for cruise ships, and consequently boasts a thriving duty-free shopping community, a range of resorts and villas, and numerous leisure and sightseeing activities, as well as a well-served airport.

Prickly Pear Island, BVI
The lovely little island of Prickly Pear gets its name for its habitat that favors this cactus species. The island is situated in the North Sound of Virgin Gorda, which is generally considered to be the island Columbus named Saint Ursula. How and when Virgin Gorda became the “Fat Virgin,” no one is certain. All land over 1,000 feet high on Virgin Gorda has been designated National Park, thus preserving its natural beauty. It is also known for long, exquisite white sand beaches, including several on Prickly Pear itself, which boasts some of the BVIs’ loveliest. In 1964 Laurence Rockefeller built the island’s first resort hotel at Little Dix Bay, and since then Virgin Gorda has continued to grow in popularity with visitors. Weather permitting the ship makes a brief stop off Spanish Town to disembark those guests going on tour. It then repositions to anchor off Prickly Pear where the crew gets set up to treat you to a complimentary Prickly Pear beach party. A tender picks up all guests on tour at Leverick Bay to return them directly to Prickly Pear in time for this event.

Oranjestad, Sint Eustatius, AN
Twelve-square-mile “Statia” is a tranquil place today, but in its heyday it was the most important depot for ammunition and other goods sent to the rebellious colonies of North America during their war of independence. In fact it was the first foreign place to recognize the United States, with a cannon salute in November of 1776. Later, its importance in the ongoing “Triangle Trade” between Africa, Europe and North America, gave it the nickname “The Golden Rock.” Renowned for its superb underwater scenery, Stacia is also a favorite spot for ecotourists in search of remnants of unspoiled Caribbean nature.

St. Johns, Antigua
Antigua is blessed with an abundance of shining white beaches, and many of these have sprouted top-end resort hotels that engender golf courses and other amenities counted among the best in the Caribbean. A pleasant drive up through farms and tiny villages leads to the commanding fortress on Shirley Heights, from which you can survey the town and the harbor of Nelson’s Dockyard across the island. Once a carenage for British frigates, today it is an enclave of shops and restaurants.

Yachtsmen call it a “very boaty place” with a large marina that sometimes welcomes up to 200 boats. Tucked under the peak of Piton Creve-Coeur is an old sugar plantation from the beginning of the 18th century. The town is very French, with wines, patés and cheeses imported across the Atlantic. Le Marin is a slice of the Old Caribbean on Martinique’s quiet side.

Kralendijk (Bonaire), Antilles
Discovered in 1499 by an expedition led by Amerigo Vespucci, Bonaire has quite a varied history. Indian drawings, which can be seen today in several places, depict life and events which took place centuries before the island’s discovery by Europeans. The Spanish colonization lasted for little more than a century, ending in 1634, when the Dutch from Curaccao arrived to occupy Bonaire during their war against Spain. In 1636, Bonaire became a Dutch colony. Salt production, corn and stock breeding were developed as major economic elements. Today, the island’s economy depends largely on tourism. A friendly ‘bon bini’ from the locals greets you during your visit ashore. Enjoy a stroll through Kralendijk, past the fish market, duty-free shops of Breedestraat, the waterfront promenade and the quaint toy-like houses exemplifying the Dutch colonial architecture.

*Prices are per person, for cruise only, based on double occupancy. Price reflect best fares available for each stateroom on one date that this itinerary is available, from a snapshot taken in the last 24 hours for staterooms in each category. Changing the dates may change prices. Fares include Government Fees & Taxes. Pricing and availability subject to change without notice. Suite availability varies by ship and category. Images shown are representative of a suite in that category. Suite measurements are approximated, and suites in the same category may vary in size and/or have different furniture placement, windows or fixtures from those pictured.